As Russia wages war in Ukraine, the step-up in the activity of pro-Russian violent extremist groups has taken an alarming dimension in Georgia. Appalling incidents of antisemitism have been reported. Also, several Georgian Orthodox clergymen have made hateful antisemitic statements that echo the messages coming from the Russian Patriarchate.

A new wave of antisemitism against murdered Vitaly Safarov

According to reports, unidentified fascist groups have launched an alarming antisemitic campaign against the late Vitaly Safarov, a young human rights defender killed on ethnic and antisemitic grounds in 2018, and his family. On 4 March, Vitaly Safarov’s mother became a target of antisemitic hate assault via social networks. She received several phone messages of fascist and xenophobic nature from unidentified senders. In parallel, a number of antisemitic profiles and pages have appeared on Facebook, using photos of deceased Safarov and spreading fascist, antisemitic messages, including calls to annihilate Jews. The family instantly contacted the police and reported the incident, asking to investigate it. The status or results of the investigation are yet unknown.

Vitaly Safarov, 25-year-old human rights defender, was murdered on the ground of intolerance in the center of Tbilisi in 2018. The case materials and testimonies of witnesses revealed that it was a hate-motivated crime committed on the grounds of ethnic intolerance and because of Safarov’s Jewish origin. Despite this, the court refrained from determining hate as a motive of the crime and indicted the accused persons for the killing by a group of persons. The court decision was appealed, but the consideration of the case by the appeals court is still underway.

Nazi symbol on the wall of Jewish cemetery

On 28 February, a nongovernmental organization, Israeli House, learned about the Nazi swastika drawn by unidentified persons on the wall of the Jewish cemetery in Samgori district of Tbilisi (the exact date of vandalism is unknown). Having promptly arrived at the scene, representatives of the Israeli House called the police and officially reported the incident to Isani-Samgori Police Main Division on the same day. The status of the investigation is unknown. After the police arrived at the scene and registered the fact, representatives of the Jewish community painted the wall to erase the Nazi symbol. 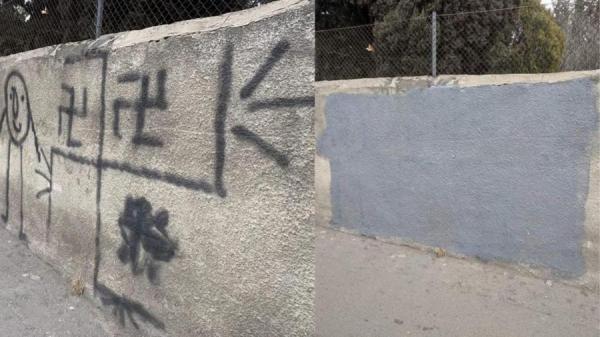 The wall of the Jewish cemetery. Photo credit: "Israeli House"

Propagandist messages of clergymen from the Georgian Orthodox Church about the ongoing war in Ukraine are often in tune with those of the Kremlin and Russian Patriarchate. Reference to President Zelensky’s Jewish origin is often made within a pejorative context, he is often presented as a “gay activist” while Russia’s war in Ukraine as a “battle” between the West and “Russian Orthodox values.” Orthodox clergymen aggressively promulgate Soviet propaganda and Putin’s main messages, including about invincibility of Russia, Russia-Ukraine unity and hostile plans of NATO and the West. They speak of Russia as a country “caring about” its neighboring states and people, thus echoing the key Kremlin message about “denazification” and “demilitarization” of Ukraine.

On 6 March, a clergyman of the Orthodox Church, Khareba Chikovani, shared a post on Facebook, in which the author of the post writes, within the context of the war in Ukraine, that President Zelensky is a Jew and as part of the conspiracy theory, he purposefully kills Ukrainians: “Many of you must have watched the interview with a Jewish billionaire politician Igor Berkut recorded in 2017, in which he speaks about a project, New Israel. According to the project, the population of Ukraine shall be cut down to 5 million. Numerous discussions of this theory can be found on YouTube (old videos). What a coincidence. Zelensky is also a Jew and has close ties with Masons.”

On 27 February, Giorgi Samsonadze, a priest of Mtskheta-Tbilisi Eparchy, shared a post of antisemitic content on his personal Facebook page, in which the author of the post puts the blame of Russian aggression on Jews with “curls,” clearly placing them within an antisemitic, humiliating, offending context, and promotes a conspiracy theory about Jewish control of the world. 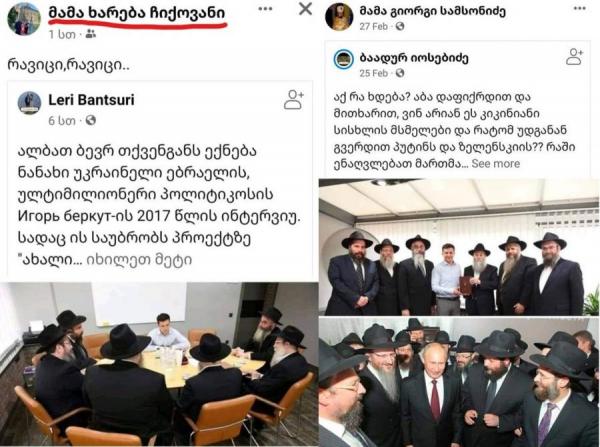 In parallel with Russia’s military aggression against Ukraine, the Kremlin actively employs soft power – the Orthodox Church, media, and various civic groups to spread its propaganda messages. Against these developments, openly violent, pro-Kremlin, xenophobic groups in Georgia, enjoying impunity despite violent acts committed by them, have stepped up their activity and pose a serious threat to the state security, sovereignty and Euro-Atlantic integration of Georgia.

Workshop on freedom of religion or belief for NGO, religious and media representatives