Tracing the Evangelical-Lutheran Church in Georgia

"It was believed that a state in which nations follow different rules of worship cannot achieve unity and will disintegrate. The Reformation proved that such view results from ignorance; it proved that a state can accommodate diverse religions perfectly well and such diversity cannot shake the foundation of unity even slightly.”

The Evangelical Lutheran Church in Georgia marks its 200th anniversary. This date coincides with the 500th anniversary of the Reformation. Martin Luther’s theological revolution gave an impulse to political, economic and cultural shifts and largely shaped the form and content of the Western civilization. The Reformation launched by nailing “95 Theses” to the door of the church in Wittenberg, laid the foundation to a specific, Protestant work ethics.

It was precisely because of extraordinary industry of Lutherans that they appeared in Georgia. The Tsarist government was interested in resettling Germans in provinces of the Empire as it was believed that Germans would contribute to the development of various economic fields and transfer advanced knowledge to local population. The Empire allocated lands to them, exempted them from taxes and pledged to ensure religious freedom.

Swabian Germans arrived in Georgia in 1817-1818. Many of them did not regard themselves as belonging to the official Lutheran Church and in their historical homeland they were branded as separatists, experienced religious persecution and economic hardships. Germans who resettled in Russian empire were called the “colonists.”

The travel to Georgia was not an easy one – a segment of Swabian Germans did not make it to Georgia as disease took some of their lives. Several hundreds of families from Baden-Württemberg set up settlements in the vicinity of Tbilisi. By 1819, there were eight German colonies[1] in the South Caucasus. Later, their number grew.

As of today, 23 German settlements have been identified in Georgia, with more than 1,200 structures and buildings as well as the industrial heritage of Alexander von Kutschenbach and 15 residential houses in the city of Dmanisi. Some 37 objects represent monuments of cultural heritage.

Germans displayed such an extraordinary diligence that Ilia Chavchavadze wrote: “We are poor in our country whereas German newcomers are so rich that they can easily afford to bring up their children and feed their families.” Such a state of affairs, according to Ilia Chavchavadze, was “because Germans and smart people of their ilk regard knowledge and education not as a mere ornamental trimming, like a lace or braid for Chokha or outfit. They view knowledge and education as a necessity like a daily bread, and therefore, when working for a living they work very hard to save money for the upbringing of their children too.” 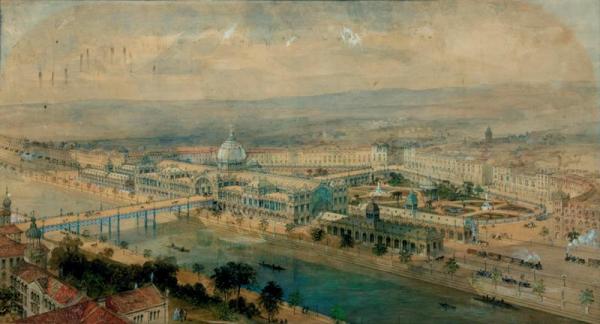 It took time for German settlers to get united and integrated into the official Lutheran Church. Their religious composition was disparate. Germans themselves chose their religious teachers, held gatherings and services, taught catechism; however, the colonies remained divided in terms of their religious services and beliefs.

In 1824, Lutheran missionaries arrived in Tbilisi while in 1827, Johannes Bernhard Saltet from Basel was appointed the chief pastor. The Basel mission sent young Europeans as missionaries. New preachers charmed the colonists. They summoned the first synod and drew up a charter of colonists, which strictly defined the rule of life of Germans, paying a great deal of attention to both prayer and work. Saltet’s religious activity resulted in Swabian Germans joining the Evangelical Lutheran Church and in 1834, the first church was built in Neu Tiflis settlement. 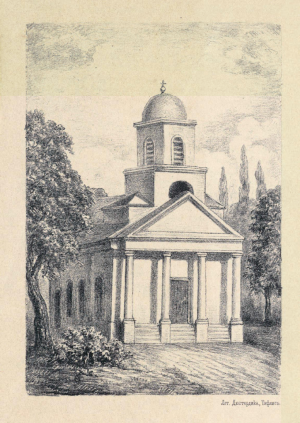 Germans not only got down to learning local languages but also subscribed for magazines and newspapers, which speaks for the diversity of their interests and especially towards the local way of life.

The indicator of literacy was the highest among them as two third of over 25 000 Germans living in the Caucasus in 1926 was literate.

Evangelical-Lutherans paid a great deal of attention to education of their children. From 1850 to the 1940s, there was the St. Peter and Paul ten-year educational institution in Tbilisi where students were taught in German.

In 1886, Lutherans founded the Women’s Evangelical Lutheran Charity Society with the aim to assist disadvantaged members of colonies. Although founded to aid Lutherans, this institution soon provided shelter to Georgian Orthodox Christians and Catholics too.

Germans proved very successful in vine growing, farming and animal husbandry. Their houses and yards illustrated their work ethics. There was a church, school, pharmacy, hotel, tavern and many shops in the center of a German settlement.

Germans were the first to open a brewery and brewed Bavarian beer.

The Brother Siemens Company installed local and international telegraph lines in the 1850s-1860s.

Germans were also the first clockmakers in Tbilisi.

German pharmacists held the monopoly in the pharmacy business in the 19th century. The first public pharmacy was opened by Flor Schönberg in 1828. This building continues to stand on the Leonidze Street.

A Swiss citizen, Baron Alexander von Kutschenbach, opened Swiss cheese factories near Tbilisi and Dmanisi. By 1913, as many as 37 Swiss cheese making enterprises operated in the Borchalo Uyezd.

Germans were engaged in fruit growing, bee farming, and vegetable growing; potato growing was an especially developed field; they were successful in animal husbandry too and sold milk and butter.

Historical sources prove that Swabian Germans and Georgians had very cordial relations. Swabian Germans learned the Georgian language much earlier than the Russian language. At the end of the 19th century, Georgians decided to build an Orthodox church in the Katharinenfeld settlement. Germans offered help. Germans also greatly contributed to the development of architecture, art and culture.

The Botanical Garden and the present-day 9th of April Garden in Tbilisi, also, the Borjomi Park were designed and built by architect Heinrich Scharer.

Naturalist and explorer Gustav Radde is believed to be among the founders of the National Museum of Georgia.

Oskar Schmerling established the Tbilisi Art Studio. He was one of first artists of Georgian caricature.

Persecution of Germans began during the First World War; colonies were renamed; in 1915, the community was put under the surveillance of warders appointed by the government. Farming was first restricted, and then totally prohibited, to citizens of German origin. They were forced to sell their immovable property.

By 1918, Germans felt some relief. They welcomed the declaration of independence of Georgia, marked the 100th anniversary of their resettlement in Georgia and of the foundation of Lutheran community.

With the Soviet occupation, however, the persecution of Lutherans on religious and ethnic grounds resumed. In 1941-1942, the total of 20 423 Germans were exiled from Georgia.

Before sending Germans into the exile, the Soviet government closed down the St Peter and Paul Church, the 19th century neo-Gothic monument on the “Kirche” square, arrested and then executed Oberpastor Richard Mayer. The family of Georgia’s last Oberpastor was obliterated with the exception of his son who, after a series of arrests, returned to Tbilisi only to soon move to Germany.

After regaining the independence of the state, Georgia’s citizens of German origin established the association Einung which, since its inception, has been led by Harry Augst.

During Soviet repressions, the Evangelical-Lutheran Church suffered an immense material and moral damage. The Church now demands that the state return the seized property or compensate the damages.

The St. Peter and Paul Church of Neu Tiflis, a neo-Gothic monument built in 1897 on present-day Aghmashenebeli Avenue in Tbilisi, was torn down by the communist regime with the hands of German prisoners-of-war in 1946. A residential house now stands on the location of the church.

The Church of the Savior in the former Alexanderdorf, which was built in the 19th century, no longer stands on Agladze Street either.

A Lutheran Church of the Savior in former Elizabethtal, which was constructed in the village of Asureti in 1871, is a monument of cultural heritage. During the Soviet period it was transformed into a club and its façade was modified.

A Lutheran church in the former Katharinenfeld (present-day Bolnisi) which was built in 1854, now houses a sports hall. A religious appearance of the building was completely altered.

The church in Marienfeld, the first German colony in Gardabani, was robbed of its function and authenticity thus making it hardly recognizable. The place is abandoned and a complete mess.

The village of Trialeti still houses the church of Alexandershilf. In 2017, with a financial support from the Foreign Affairs Ministry of Germany, the roof of this church was repaired. It is worth to note that the church has features characteristic of Georgian architecture. In Georgia, near Sokhumi, there is a church which was built in 1913 and consecrated anew in 2002.

The state refuses to recognize the damage caused to the Evangelical Lutheran community and the need to compensate these damages.[2]

A modern Evangelical-Lutheran Church in Georgia was established by theologian Dr. Gert Hummel. He became the first episcope of the Church.

Dr. Hummel and his wife Christiane moved to Georgia and with their savings as well as others’ contributions built a Lutheran Church of Reconciliation in Tbilisi, on the location of the former German cemetery. The consecration of the church took place in 1997. Two years later, a Church of Peace was built in Rustavi.

Today, the Church has congregations in Tbilisi, Rustavi, Bolnisi, Borjomi, Gardabani and Sokhumi. In 2002, an old Evangelical Lutheran Church of St. John in Sokhumi was restored and consecrated again. St. Paul the Apostle Church was built in Bolnisi.

Lutherans provide help to everyone, regardless of their religious or ethnic belonging.

The Evangelical-Lutheran Church of Georgia is no longer German. The followers of Luther increasingly include people of various ethnicities. 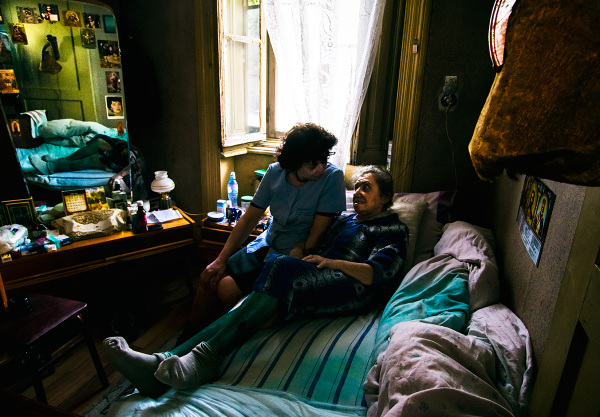 A nurse of diaconal service of the Evangelical Lutheran Church at a patient’s home.

[2] Since 2014, on a premise of providing a symbolic compensation for damages suffered during the Soviet period, the state has been funding four religious organizations. The State Agency for Religious Issues (SARI) defined selection criteria for religious association. The criteria defined by the Agency rely on three indicators: the numbers of congregation, clergy and houses of worship. It is impossible to use these criteria for assessing the damage caused during the Soviet totalitarian regime as none of those criteria considers the amount of damage or/and mechanisms to identify it. For example, a religious community which was subject to the most severe repression may now possess the fewest religious buildings. The same holds true for the number of clergy and congregation. Consequently, the selection criteria are irrelevant to the aim of allocating financial resources and instead of compensating damages, define the rule of subsidizing religious denominations. Soviet repressions caused damage to a much greater number of religious communities. The recognition of only four religious organizations as victims of repressions is a differential and discriminatory treatment of the issue by the state.

This article was made possible by the generous support of the American People through The United States Agency for International Development (USAID). The content of this article is the responsibility of TDI and the author and does not necessarily reflect the views of East West Management Institute, USAID or United States Government.

The project is implemented by the Tolerance and Diversity Institute within the framework of USAUD program, Promoting Rule of Law in Georgia (PROLoG), carried out by the East-West Management Institute (EWMI).