Government of Georgia transferred Tandoyants temple to the Orthodox Church

In July 2017, the Government of Georgia illegally transferred the Tandoyants Surb Astvatsatsin damaged church and its surrounding area, located on Agmashenebeli Ave. 38, Tbilisi, to the Georgian Apostolic Autocephalous Orthodox Church.

The State has not studied the historical origins of the Church and its cultural and confessional characteristics before the transfer was conducted. The Patriarchate has already launched variety of works on the foundation.

Historical Sources on Origins of the Church

Armenian origin of the Church and the fact that the Church belonged to the Armenian Apostolic Orthodox Church is confirmed with numerous sources. Armenian inscription of the following context still exists on Agmashenebeli ave. 38:

“This school is built with own funds, by the Tbilisian widow Kekel Grigorian-Tandoyants, in origin Babasiani, with support of her brother Alexandre Grigorian-Babasiani and in remembrance of the souls of builders of this church, that are buried in this temple – Saak Tandoyants church ... 1883” 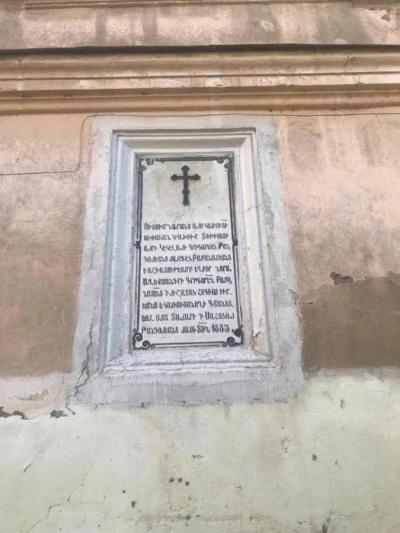 Thus, according to this version the mentioned church is Tandoyants Virgin Mary Armenian Church.

The information on Armenian origins of the Church can be found in other sources as well. E.g. the survey published by the Tbilisi City Hall makes the reference to notice of Leon Melikset-Beg regarding the Church: “The Holy Virgin Mary Church was supposedly built by Sahak Tandoyants in 1860. The plan of Tbilisi of 1867 clearly shows the church existing here. [...]The building of the former school is located nearby [...] The tile with Armenian inscription still remains on the building. According to the inscription, the mentioned school was built in 1883 with the contribution of Tbilisian widow Kekela Tandoyants and her brother Alexander Babanasyants”.

In the research published by Tbilisi City Hall, the researcher Sophio Chanishvili points out the fact the Armenian church could have been built on the basis of church of village Kukia. However, there is no official information regarding the Orthodox-Christian origins of the church on Agmashenebeli ave., 38.[1]

It is noteworthy that on maps of Tbilisi of the 20th Century (1913 and 1924) the mentioned building is depicted as Armenian Church. Furthermore, TDI has inquired the documents preserved in the National Archives: in ecclesiastical records of Tandoyants Virgin Mary Church of 1874, 1875, 1884, 1907, 1921. 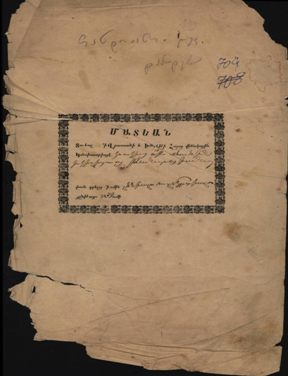 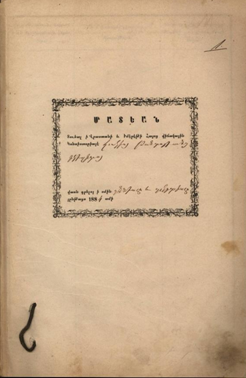 The church was closed during the Soviet Occupation, similar to other houses of worship and was deprived from the religious community. The resolution of Presidium of Tbilisi Executive Committee confirms the closure of the church[2].

On August 12, 1927 “Tiflis Executive Committee Economic sub-division” took the building. The building was used for various functions afterwards. Including as a movie theatre and yard-keepers club.[3]

In 2015-2016, during the rehabilitation process of Agmashenebeli Avenue, within the frameworks of project New Tiflis, the Government recognized the damaged house of worship on Agmashenebeli ave. 38, as an Armenian church and mentioned it as Gregorian Holy Cross Apparition Church. 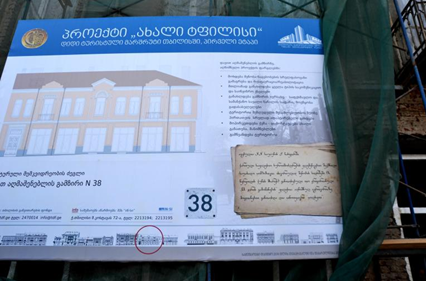 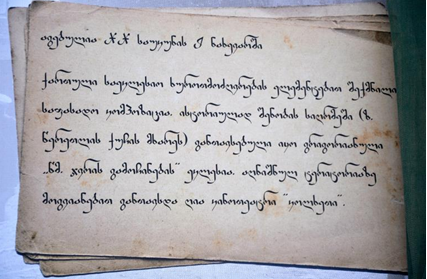 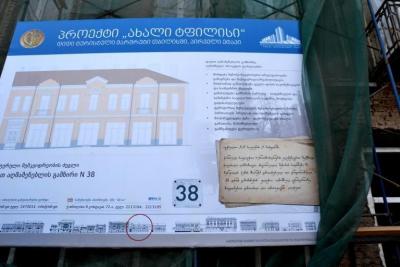 In the registration card of immovable cultural property, art critic Lali Andronikashvili points out that inscription on the building next to the church and other decorative elements remaining on the territory confirm the existence of Armenian temple in 1883. Andronikashvili notes that the mentioned place is depicted as Akhalsopeli domeless, nameless church on left bank of river Mtkvari on Vakhushti Batonishvili 1735 Tbilisi map. When describing antiquities of Tbilisi, Platon Ioseliani points out that “a smaller church was assigned to Kviratskhoveli Church, that existed on Kukia until 1622, that was destroyed by Shah Abbas”. The author suggests that in the beginning of 19th Century Armenians have built a new church, presumably Tandoyants. Lali Andronikashvili notes that “the volume that currently exists is clearly of Armenian origin”.

On December 27, 2015 the Diocese of the Armenian Apostolic Orthodox Holy Church in Georgia applied to the National Agency of Cultural Heritage Preservation to grant Tandoyants church, located in Tbilisi, Agmashenebeli ave. 38 the status of immovable cultural monument.

On February 17, 2016, the Armenian Apostolic Church was informed that the Giorgi Chubinashvili National Research Centre for Georgian Art History and Heritage Preservation would assist the Agency in the process of granting the status of immovable cultural monument to the Tandoyants Church, located in Tbilisi, Agmashenebeli ave. 38. In the same letter Deputy General Director, Paata Gaprindashvili pointed out that following the works, the procedures for granting the status of monument would be initiated and the applicant, Diocese of the Armenian Apostolic Church would be informed regarding the above-mentioned. Up to this date the Diocese of the Armenian Apostolic Church has not been informed regarding the launch/completion of works. However, it is noteworthy that in the mentioned letter the Agency referred to the Church as Tandoyants Surb Astvatsatsin.

On April 08, 2017, Archpriest Michael Botkoveli, secretary of Catholicos-Patriarch of All Georgia, applied to the Agency of Cultural Heritage Preservation and requested the information regarding the ruins of church on Agmashenebeli  ave. 38. In his letter the Archpriest indicated that Patriarchate was submitted “the letter of population [..] to restore the ruins of church and conduct divine services in future”.

On May 1, 2017, National Agency of Cultural Heritage Preservation of Georgia informed the Patriarchate that “in historical part of Tbilisi, old Kukia, left bank of river Mtkvari, where I. Tsereteli street joins David Agmashenebeli avenue, existence of small church is confirmed with historical sources, which was destroyed in 1622, during Shah Abbas era and on the ruins of old church, Holy Cross Apparition Church was built in 1814-1816 by priest Petre Imnadze, with blessings of Varlam Eristavi. As the Agency explains in the letter to the Diocese of the Armenian Apostolic Church[4], the mentioned response is based on historical source, namely, the work included in catalogue of D. Karichashvili “Monasteries and churches in Tiflis and surrounding area” (1837).

It is noteworthy that the National Agency of Cultural Heritage Preservation referred to only one source, while besides the evidences on the mentioned disputed building, there are archival materials that indicate the existence of Armenian church and its deprivation from Diocese of the Armenian Apostolic Church during the Soviet occupation.

Transferring the Tandoyants Church to the Georgian Orthodox Church

On June 23, 2016, Archpriest Michael Botkoveli, secretary of Catholicos-Patriarch of All Georgia, applied to National Agency of Public Registry and requested to register the ruins of the church on Agmashenebeli ave. 38 (Cadastral code: 01.16.05.025.005.22.500)  in the ownership of the Patriarchate of Orthodox Church.

The Patriarchate of Georgia points out in the application[5] that based on the “historical sources and maps”,  the location where the ruins of the church are remained, was known as village Kukia. Based on the same sources “the fortified temple with bastion fortress with darkened towers and own garden was depicted on the plan of 1800-1802”. Archpriest Michael Botkoveli points out that Holy Cross Apparition Church was built in 1814-1815 in the mentioned location under the leadership of priest Petre Imnadze.

The Patriarchate of Georgia has not submitted any official evidences that could confirm confessional origin of the Church.

Considering the fact, the property requested by the Patriarchate of Georgia (land and ruined church) by 2016 was held on the books of a State, the National Agency of Public Registry could not register the mentioned property automatically in the name of Patriarchate of Georgia. Thus, in April 28, 2017, Diocesan Bishop of Catholicos-Patriarch of All Georgia, Iakob Iakobishvili applied to the Minister of Economy and Sustainable Development of Georgia, Giorgi Gakharia[6] to cancel the state registration of the Church. The application referred to the justification given in the letter sent to the Public Registry.

On July 10, 2017, the National Agency of State Property cancelled the requested property registration with the Order N1/1-1600 based on the letter of Diocesan Bishop of Catholicos-Patriarch of All Georgia 28.04.2017 that allowed the National Agency of Public Registry to register 4591 m² land plot with ruined church on it on the name of the Patriarchate of Georgia on July 26, 2017.

It is noteworthy that neither Public Registry nor the National Agency of State Property have requested any additional documentation from the Patriarchate of Georgia regarding the confessional origin of the Church. Neither have the State studied the history of the building that indicates the biased attitude towards the religious group and legal ambiguity of the decision.

After receiving the property in the ownership, the Patriarchate of Georgia initiated excavation and cleaning works on Agmashenebeli ave. 38 that eventually should be aimed at building the new church on the ruins of the old one. The works are done under the supervision of the representative of the Orthodox Church, Archpriest Giorgi Peikrishvili. The funds are also collected for the construction of the church.

It is noteworthy that the other building on Agmashenebeli ave. 38 is granted the status of cultural heritage monument.[7] As the church in the same area is located within the same cadastral boundaries, it is regulated by the legal regulation envisaged for the monument defined by the Law of Georgia of Cultural Heritage. This, above of all, means that any kind of works on the monument are prohibited without an appropriate permit.[8] Tbilisi City Hall confirms[9] that the works on church on Agmashenebeli ave. 38 are conducted by the Patriarchate of Georgia, however the permit prescribed by the law to conduct the works is not issued. Thus, the works conducted by the Patriarchate of Georgia in the mentioned area are illegal.

It is noteworthy that in the survey published by the Tbilisi City Hall (2016) S. Chanishvili noted about Tandoyants Virgin Mary Church on Agmashenebeli ave. 38 that “it is desirable to improve the area and is important to pay attention to gravestones in the process and fix them”.

As of December 2017, the foundation of the ruined church is partially excavated, the surrounding area is cleaned from the ruined stones and certain construction works are being conducted on the area. There is a high risk of damaging and collapsing historical and cultural characteristics of the building, including the gravestones.

Should be noted, that one of the main challenges for the religious organizations, including Armenian Apostolic Church[10], still remains the restitution of the property confiscated during the Soviet period. The part of the mentioned property is in the ownership of the State and the other part was transferred to the Patriarchate of Georgia. Besides the fact that the religious organizations cannot return the historical property, historical property and monuments of cultural heritage of Georgia are often damaged and ruined during the years due to discriminatory policy and negligence of the State.

TDI’s assessment on the transfer of church to the Patriarchate of Georgia is based on requested public information from Public Registry, Tbilisi City Hall, Ministry of the Culture and Monument Protection and National Agency of Cultural Heritage Preservation, Ministry of Economy and Sustainable Development, the sources and documents preserved in the National Archives of Georgia obtained by the organization.

[5] Statement N700 of Archpriest Michael Botkoveli, secretary of Catholicos-Patriarch of All Georgia of 23.06.2016

[6] Letter N28 of Diocesan Bishop of Catholicos-Patriarch of All Georgia, Iakob Iakobishvili of 28.04.2017